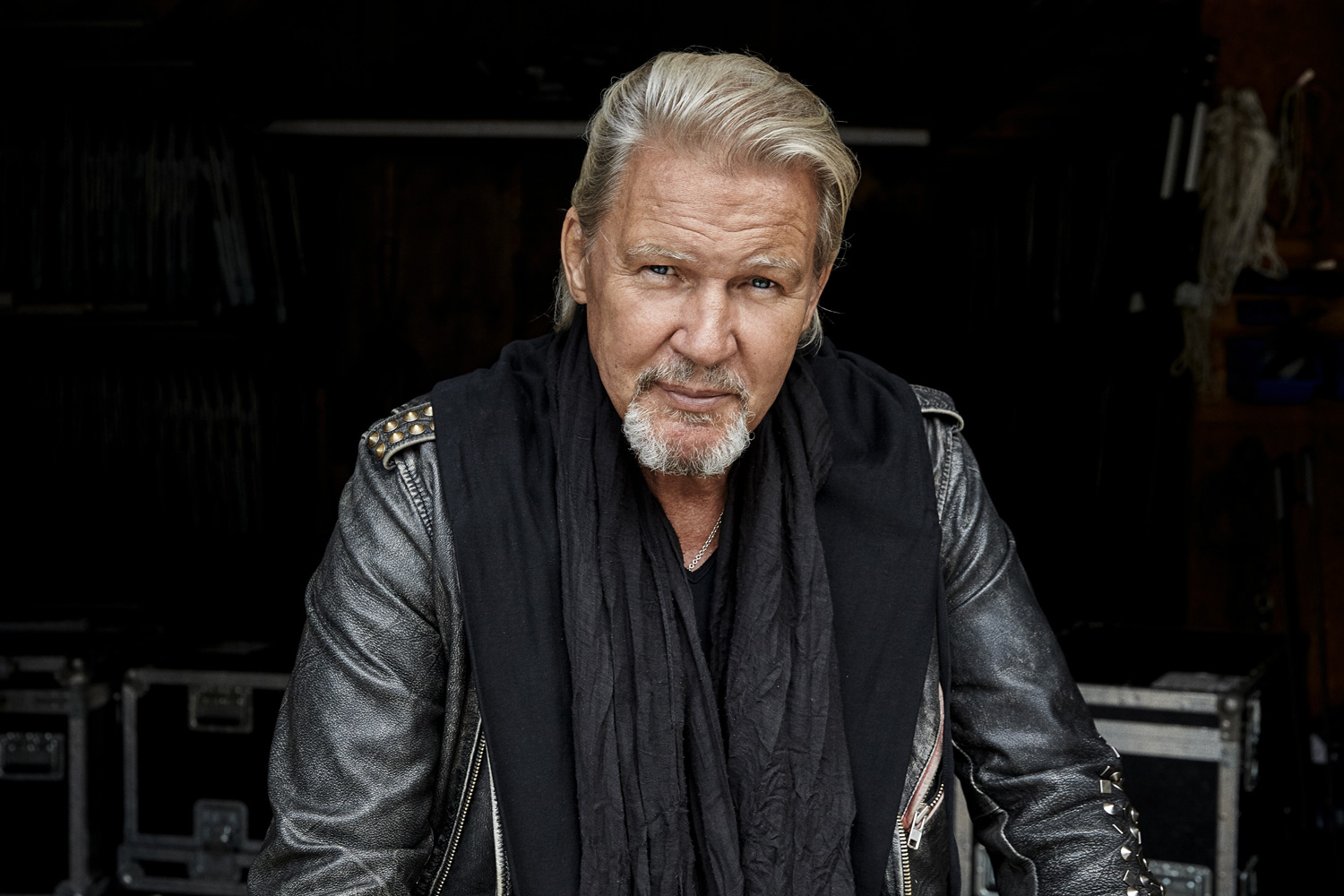 Born 1954 in Melbourne, Australia, Johnny Logan moved to Ireland with his family aged three. Barely twelve years old, Sean Patrick Michael Sherrard Johnny Logans birth name – accompanied his father, the famous tenor Patrick O’Hagan, on tours in Australia and New Zealand. There he and his father found themselves killing time by singing together in the dressing rooms of the great concert halls. This period had a tremendous influence on Johnny Logan, encouraging him to become a musician as well. By the time he was thirteen he had learned to play the guitar and had started writing songs. The rest is music history.

Release of the CD Johnny Logan “The Irish Soul – The irish Connection 2”  on 29th.of April 2013 in Denmark

Charty Entry Denmark 20 and climbed up to 7

Performance with his Band at Hamburger Rathaus Markt / Hamburg-Germnay

Played with his Band Festivals in Norway

Release of the DVD “Johnny Logan & Friends – The Irish Connection” on 11th. of Oct. 2013 in Germany/Austria/Swiss

Recording of the CD “The irish Connection 2 – The irish Soul”

Guest at the GAY PRIDE in England / Manchester

Best of Eurovision Tour in Ireland

Performance at the ANDREA BERG TV-Show in Germany/Offfenburg

Performance at X-FACTOR in Bucarest / Romania

Performance at the Opera ball in Frankfurt

Special Guest at the St. Patricks Day in Munich / Germany

Special Guest during the Eurovision in Dü sseldorf/ Germany

Chart re-entry from the CD “NATURE OF LOVE in Sweden . Highes position 6

Special Guest at the SEMINO ROSSI Concert in Iguazu / Argentina

Special Guest for the football team Bohemians at Vicar Street

Soulshow Project with the GIBSON BROTHERS in Belgium

Performance at the TV-Show TV-Total

Perfromance at the TV-Show Starnacht am Wörthersee

Performance at the TV-Show Hitgiganten

Release Nature of Love May in Denmark/Norway

Performance at THE TOPPERS Show in Amsterdam/Netherlands

Performance at the tv- show X-FACTOR in Hillversum /Netherlands

Concert at the Galway Hooker in New York / USA

Spezial guest for the football team BOHEMIANS, now a liftime member and supporter

Recording in Nashville ( Irishman in America)

Concert at Vicar Street with his danish Band in Dublin; Ireland

Jury member in Eurosong 2006 in Belgium

Charity Music Conert Lanzaid 2006 in Lanzarote. The concert was released on DVD

TV performance Willkommen Carmen Nebel and his mom from Australia surprised Johnny Logan during the tv-show in Klagenfurt./Austria

Come 2nd in the Dutch National Songfestival 2005 with the song How Does It Feel written by Johnny Logan & Andreas Lise and performed by Airforce (Stephen Stephanou, Brigitte Nijman, Lauro Vlasblom & Tony Neef)

Released CD Maci-Single We All Need Love benefiting Lichtblicke, for the children of North Rhine-Westphalia (German : Nordrhein-Westfalen). The single includes the song Die Liebe Zählt the German version of We All Need Love.

The Dutch singer Jerry G released the song Give Me the Night with music and lyrics by Johnny Logan.

At a Gala Awards Dinner at the Burlington Hotel in Dublin, Irleand, Johnny Logan received the Performing Artists Trust Society’s P.A.T.S. Award 2004 for lifetime achievement in the performing arts. Performed numerous live concerts and appeared on serval television shows including

The Young Ones Jubilee Concert 2004 at Den Dullaert in Hult, The Netherlands

Johnny Logan performed the song My Boy on Phil Coulter’s TV show Coulter & Company. The show was broadcast in Irleand on RTE and also released on CD, DVD and VHS

Toured in Germany with Voices. The Allstar Project: Paul Young, Haddaway, Johnny Logan & band The very best of the 80’s and 90’s together on stage

Finnish final for the Eurovison 2002 in Tampere, Finland

German Grand Prix Party in Reeperbahn, Hamburg before and after the Eurovision Song Contest 2002. The show was broadcast live on German television.

Released the album Save this Christmas for Me produced by Boe Larsen, Oli Poulsen, Soul Poets and Stig Kreuzfeldt in Denmark. The album includes a duet with Friends, the winner of the Swedish National Song Contest 2001

Released the album Reach For Me from Sony Music Denmark A/S, which went gold in Denmark after just eleven days

Celebrated his 47th birthday at the Eurovision Song Contest 2001, After Party held in Copenhagen, Denmark

Released the album Love Is All produced by Jack White in Germany. The album includes Jonny Logan’s own version of the old classic McCartney-song Silly Love Songs as well as a new version of Johnny Logan’s breakthrough song from 1980 Whats Another Year.

Wrote and sang the official song Anthem 99 If you Believe to The Opening Ceremony of the 43rd World Nordic Ski Championships held in Ramsau, Austria

Released the album What’s Another Year

On April 16th, 1997 Johnny Logan left his handprints in concrete on the Walk of Fame in Rotterdam The largest Star Boulevard in Europe.

Johnny Logan co. wrote Vision Of Glory for a boxing opening ceremony, which he sang as a duet with Montserrat Cabelle.

Recorded Born To Love You from The Phantom Of The Opera On Ince.

Johnny Logan played himself in the German television show Schwartz greift ein, he also recorded the song Who Will Bring Her Flowers and the title song from the television show Im No Hero.

Johnny Logan toured Norway in a concert version of the opera musical Which Witch where he played the leading rote of Catholic Bishop Daniel. Most of the perfromances were held at suitable outdoor places such as historical buildings and sites, culminating in two concerts underneath the giant Hommenkollen ski slope in Oslo, which attracted more than 20.000 people.

Johnny Logan recorded Celecbrate And Win the official song for the Track and Field-Athletics Championship 1993.

Released the album Endless Emotion produced by Jürgen Fritz and Ralf-Rene Maue in Germany. Johnny Logan’s native country Ireland selected the song Long Lie The Rivers as their single release from the album and the song was associated with the holiday St. Patrick’s Day.

Johnny Logan performed at the Vatican Christmas concert for the Pope John Paul II with other well-known artist such as Randy Crwaford and Montserrat Caballe.

Recorded in Nashville, Tennessee a country version of Miss You Nights with Elvis Presley’s backing band The Jordanaires

Released the album Mention My Name with the musicians from Level 45, Mike & The Mechanics, Wings and David Bowie’s band. Christopher Neil produced the album.

Released the album Hold Me Now

Johnny Logan appeared in the Royal Variety Performance for Queen Elizabeth II and Prince Phillip at the London Palladium.

Released the album Straight From the Heart

Participated in the Irish National Song Contest 1985 as a composer with Hearts sung by Mike Sherrard.

At the time, many people assumed that Johnny Logan was Irish, but in fact he was born in Frankston near Melbourne, Australia.

What’s Another Year quickly shot to number 1 in the UK charts and sold three million copies.

Released the album In London Participated in the Irish National Song Contest 1979 with the song Angie Readers of the Connaught Telegraph in Ireland voted Johnny Logan as Best New Male Artist.